For the first time in possibly about nine days, i put on some make-up. My mate was dressed up and ready to go. My fashion styling right now has taken a turn into the realms of ‘alternative strange’ because it really is a test to one’s ability to ‘dress out of a suitcase from the back of a van’ on a day-to-day basis. Anyway, my friend said i looked okay and i can trust her on that one because she is a smart dresser herself and i know she’s not a ‘yes person’ just for the sake of it.

She drove me ten minutes up the road to her ‘semi-regular’ haunt of a ‘high-end’ restaurant/bar. Half past seven and already it was pretty busy. We sat off in the bar area for pre-drinks, mine a bombay sapphire and soda, hers a gordons and tonic. Then comes the time to get our table. Once seated i take a look around and there is some great quirky artwork, trinkets and china dog ornaments (one of which had his photograph taken with another diner). 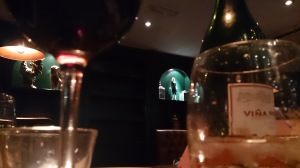 We ordered Rioja (purportedly with hint of vanilla and coconut!) from Spain – could grasp the vanilla but unsure as to whether the coconut was there or lucidly longed for because it had been mentioned.  My friend went for the beef, i chose lamb shank .. and we didn’t have to wait too long for our dishes to arrive. Absolutely beautiful food. I had mashed spinach, broccoli spears and green beans too… all of which were cooked to a superb standard and worth the £16.50 price tag.

With dinner done we returned to the bar to carry on with our drinking. The bottle of wine having been happily swigged and opened the taste buds for some further glugging.

My next choice was a ‘Countryside Old Fashioned’ a deep bourbon with a spoonful of sugar (a special blended sugar of cinnamon, all spice, nutmeg and some other secret spices) and plenty of ice, which, the very chatty and knowledgeable Gareth (our bartender) whizzed round and round with his long-handled spoon, the result of which was an amazing tasting ‘cocktail’.

My friend played it safe to be honest and stayed on the Clavijo Rioja (@ £7.95 per 250ml glass!) …  My next choice was a regular glass of ‘safe’ Prosecco…

and then Gareth, seeing that we were having a good time, edged us toward trying a favourite of his (and easy to make he stated) .. The Hazel Espresso, and yes, it was the perfect ‘cold coffee liquor’ (without the mound of fresh cream that can leave a heavy floating feeling in the belly), instead, it was a concoction of sweet strong smooth easy (far too easy) drinking cocktail.

I’ll have another thank you very much.

Then i tottered off to the little girl’s room.

Five minutes later i’m back sat at the bar.  Gareth made his way round and was heading through the thinning crowd, and me being the jester that i am, said ‘oh you needn’t have bothered’…. cos he was carrying what looked like a cake for someone …  turns out it was for me, my friend had quickly pleaded them to do something toward a birthday gesture for me …..

Continuing with the wonderful hazel espresso, i was bought another by a regular (Phil), who, by this time had started conversation with my friend and kept up being part of our late evening at the bar (right til the end in fact as we were the last to leave).

My nightcap at the bar was an Evan Williams Honey which absolutely laughed all over the JD Honey which has recently hit the supermarket shelves. My well-informed bartender imparted the fact that the Evan Williams was a lot harder to purchase – else you go to Amazon where you can find it in plenty.

Me and my friend changed out of our kitten heels into our snugg boots and walked the B road curbside back home.

I chose to sleep on her plush cream sofa for the first couple of hours until realising that i was bent double, internal thermometer rising, and having very strange dreams about being bitten on the arse by a dog whom i knew was going to bite me and which i was a bit fearful of but my love of dogs had made me less able to move away from it…  and then there were other vicious dogs too but who turned out to be harmless … and there was a big house with a room in which when i touched a tap on the wall, the plaster all fell away and crumpled into a neat pile to the right of where i was standing. After which, several men, some of whom i thought i knew, some i didn’t, all begin to congregate in the house.

I sat upright, picked up the high tog duvet (must have been that causing my hotness) and snuck upstairs to grab another couple of fitful hours on a ‘princess’ mattress size bed.